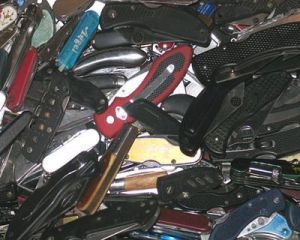 “I learned two things in the Navy. I learned how to tie a knot and how to sharpen a knife.”
As a boy of about ten, I watched wide-eyed as my brother used his pocket knife to shave the hair off his arm in demonstration.
When I tie a knot it doesn’t stay tied and its never tight. My brother could take a knife that wouldn’t cut butter and in no time at all, shave with it. I could take his knife and in no time at all, it wouldn’t cut butter! My pocket knife won’t shave. In fact my pocket knife barely cuts a string … and I like it that way.
A long time ago I carried a brother-sharpened pocket knife. I was amazed at how easily it cut the hay bales I fed to the horses. I could slice through anything with it!
I still bear the scar on my index finger. While cutting an apple for my horse, I continued my slice as it went deeply into my finger! So now I carry a dull pocket knife. It was easier to just let it be dull than it was to learn to sharpen it and learn to be careful enough with it. It stays dull now and its better that way.
Knives are like people. They come in different sizes, some with assorted “blades” that can do almost anything, others with deft skill that can accomplish great things. Then there are others, who often feel like they are just never quite sharp enough for the job at hand.
The thought of hurting another person is repulsive to me. I would rather be careful with my words and with my actions so that after I have said or done what was needed I don’t find my words “slicing” into another’s heart. My finger hurt for a long time. It was bandaged for a long time. As I said, I still bear the scar today.
In our world of production, profit, and gain too often our goal is to have the “sharpest knife” possible so that in our chosen job or perhaps even in our home we might operate with precision and efficiency. But how many deep wounds are we leaving behind with our words or actions that take a long time to heal and leave a life-long scar?
“The Lord has told you, human, what is good; he has told you what he wants from you: to do what is right to other people, love being kind to others,
and live humbly, obeying your God.” -Micah 6:8